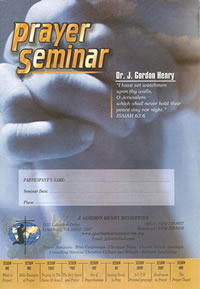 A Day In God's Court is an in-depth seminar that teaches the importance of a proper and effective prayer life for the Christian and clearly demonstrates the spiritual impact every Christian can generate through prayer. Often someone comments that the prayer seminar ministry is unique as far as its thrust, format, and content are concerned.  Since 1977, the burden to help believers, regardless of denominational affiliation, in their prayer lives has become increasingly intense in the life of the seminar leader, Dr. Henry.

HOW TO:
•    Establish prayer as a daily priority.
•    Organize your praying following a biblical pattern.
•    Worship, praise, confess, and thank the Lord.
•    Pray for yourself, as well as others.

There have been seminars in Bible colleges and liberal arts colleges/universities. Prayer seminars have been conducted for state-wide men's retreats, state denominational annual meetings, summer camp meetings and/or retreats for special groups, such as pastors. Seminars have been conducted on military bases and in prisons. Not only does the  prayer seminar stand alone in its impact as a special event, it is  excellent preparation for evangelistic efforts, revival meetings, lay witness programs,  stewardship emphases (including building programs and budget subscription  drives), mission projects, and leadership development focus.

The format calls for Dr. Henry's spending six hours teaching on the subject of prayer to everyone sixth grade and above.  Although most of the seminars are conducted on Sundays, the leadership is encouraged  to schedule to the best advantage of the most people.  Many pastors have testified that the impact of the one-day seminar in the lives of their people has meant more than a week's revival meetings. We praise God for the great privilege of serving God's church and His people in this ministry.

One of Dr. Henry's dreams is to conduct prayer seminars in all fifty states by the end of his ministry.  Please pray about doors being opened in 2008 in the following states listed where there have been no prayer seminars: Montana, New Mexico, North Dakota, and Utah.

1 Samuel 6:17 - "And these are the golden emerods which the Philistines returned for a trespass offering unto the LORD; for Ashdod one, for Gaza one, for Askelon one, for Gath one, for Ekron one;"