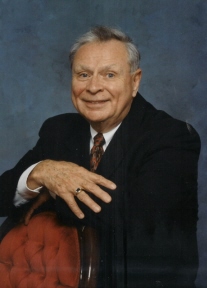 J. Gordon Henry, president-founder, J. Gordon Henry Ministries, retired as the executive director for the Transnational Association of Christian Colleges and Schools (TRACS) in 1995, following an eleven year tenure. Prior to that time, he served as president at Northeastern Bible College, Essex Fells, New Jersey. Before that, he was Dean of the College and Vice President for Academic Affairs at Liberty Baptist College (now Liberty University), Virginia. Since 1995, he has served as an educational consultant to colleges in California, Florida, Georgia, and South Carolina.

Dr. Henry, a native of White Pine, Tennessee, in the foothills of the Smokies, holds a B.A. degree from Berea College (KY), earned an M.A. from Eastern Kentucky University, and a doctorate from the University of Kentucky. He has done graduate work at Southern Baptist Theological Seminary, Duke University (NC) and Rutgers University (NJ).

During his professional career, Dr. Henry has served in a variety of roles in education, both in the private and public sector. He has served as a secondary teacher, principal, university professor and department chairman, as well as academic dean. Henry was named as one of the Outstanding Educators in America by Eastern Kentucky University in 1972 and has received an Outstanding Educator Award from his alma mater, Berea College (KY).

Dr. Henry's published works include a number of books, including the following: A Christian’s Necessary Food; Adoration: Prayer as Worship; The Enabler; Hey, I’m Saved!; Intercession: Prayer as Work; The Model Prayer; Notes from My Bible; Spiritual Warfare; the Upper Room Discourse, and the Prayer Seminar Workbook. He is presently working on a book of favorite sermons and another one that will feature a practical study from each chapter of the Bible based on daily notes he has taken beginning in 1977. He is editor of the Reflector, now in its 65th year of publication. In 2006, he merged the monthly Doorkeeper Report and Waymarks, a publication for pastors, with the Reflector.

Dr. Henry began preaching when he was seventeen years old and has been privileged to carry the message of Jesus around the world. Until he became president of Northeastern Bible College (NJ) in 1980, he had served as a pastor for over 1,400 Sundays. Since 1980, his ministry to the body of Christ has been sharing a six-hour prayer seminar, preaching, and conducting an evangelism clinic.

Dr. and Mrs. Henry have traveled together to other nations where he conducts prayer seminars, evangelism clinics, and preaches; Mrs. Henry speaks to women’s groups. Both are committed evangelical Christians who believe, without equivocation that the Bible is God's inerrant Word. The Henrys have three children, six grandchildren, and seven great-grandchildren.